– Please tell us what role you played in the development of Excitebike 64.

Hiro: The development of Excitebike 64 was handled by a company in America called Left Field. I jumped in partway through the development of the American version of the game to supervise. I would listen to the producer’s opinions and offer advice. For example, I suggested that they make it so that you can change direction in mid-air, and had them fix drifting so that it had a more satisfying feel to it. We finished the American version around the end of March and then started work on the Japanese version. I was basically the conduit between nations for the Japanese version, taking Nintendo’s opinions and proposing them to the people at Left Field. We didn’t just put the game into Japanese but also switched some stuff up for the Japanese version, so I think the game’s overall quality has been bumped up a grade.

– Excitebike was originally a Famicom title. Was it difficult to suddenly make the jump to the Nintendo 64?

Yeah, but I think people would have been disappointed if all we had done was change everything from pixels to 3D models. They seemed to be cognizant of that on the development side, as well. The fun of the Famicom version was adjusting the angle of your bike to the angle of the course as you land, and we’ve made it so that can be handled using the analog stick this time. In addition to the left-to-right aspect of dealing with corners, we’ve also included the front-to-back aspect of adjusting the angle of your bike according to the highs and lows of the course, which I feel really expands the title’s breadth as a game. 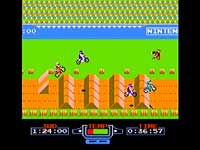 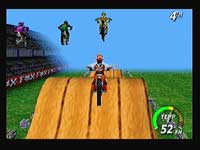 – Are there any major differences between the American and Japanese versions?

The Special Courses that were included in the American version as bonus material were really fun, so we decided to take that extra content and make it available from the get-go for the Japanese version. Doing so, however, means that the rewards we had in place for players to receive every time they finish a course in Championship Mode disappeared, so we had the game dole out passwords instead. So what we did is make a password screen that you can get to from the options menu, and if you input the password there you get to spice up the game’s visuals in interesting ways. 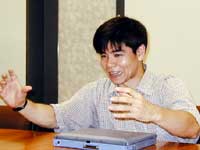 In the American version, the very concept of passwords was left a secret, and players would need to input a secret command to even access the password screen at all. Once you’re in, passwords would need to be found either on the internet or through word-of-mouth, but we decided to make it out so that passwords be handed out as rewards in the Japanese version. Putting in the password will let you, for example, make your rider’s head huge, or make the entire rider transparent. We figured that’s how we would have handled it had the game been made over at Nintendo R&D, so we decided to polish it up in that way.

– It’s not your average racing game, is it? Given the stunts, and all.

They have what are called “extreme sports” in America, so stuff like this technically falls under the same umbrella as something like skateboarding, for example. There’s also a sport that’s pretty close to Wave Race 64. It’s a racing game at heart, but it leans pretty heavily on the action side of things.

– It comes off as a bit of a hardcore title—will more casual players be able to enjoy it, as well?

Totally. As far as “extreme” games go, I feel like this one is easier to play than most. And if you get stuck on the main content, you can jump over to the special courses instead. There’s also a mode where you can play soccer while on your bike, so I’d like for everyone to check out what the game has to offer.

– What’s the trick to getting better?

You should definitely check out Training Mode. I know most people out there never bother with modes like those to begin with, but we put a lot of effort into making this one really comprehensive, so I think it would be in the player’s best interest to give it a whirl. Also, the rider with the best-balanced stats is a female character named Sarah Hill, so she would be a good choice for people who are just starting out.

– Which rider is your favorite?

Well, there’s this girl named Vicky Steele, you see… She looks similar to Risa Stegmayer, and I like that a lot. (laughs)

– If you have any secret tips to share, I would love to hear them.

In this game, you can put yourself into an “Overheat” mode where your bike begins to smoke if you lean on the turbo button too much. This was in the Famicom version too, but this overheat is different in that you can recover from it immediately by knocking down an enemy. When you’re just starting out, I expect people will be getting toppled by rival riders pretty often. This might be a bit frustrating at first, but if you let go of the accelerator or turbo button just as you collide with another rider, you won’t fall over. Training Mode is full of pro tips like this, so please give it a shot.

It may seem like a western game on the surface, but we on the Nintendo side have been there proposing ways to make it more “Nintendo-like” every step of the way, and I think that’s reflected in the final product. I would love for everyone to not dwell too heavily on how it looks, and just pick it up and give it a try.